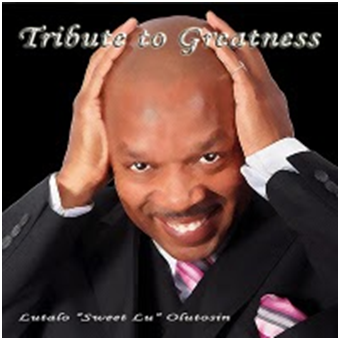 Update Required To play the media you will need to either update your browser to a recent version or update your Flash plugin.

“There are only a handful of truly proficient vocalese lyricists, a short list including Eddie Jefferson, Babs Gonzales, King Pleasure (Clarence Beeks), Jon Hendricks, and Mark Murphy. East Chicago native Lutalo Olutosin honors all this and more on his Tribute to Greatness. “-   All.About.Jazz, C. Michael Bailey,

“Lutalo has a deep, soulful voice with a recognizable influence of singer Al Jarreau. You may hear Jarreau influence in the first song, “I bet you thought I’d never find you”, even the way Lutalo scats sounds very similar to Al Jarreau. On his original songs “My Sunshine” and “Your touch” there is also influences of soul singers and little bit of funk.”  Jazz Times, Wilbert Sostre ,

“This cat can HANDLE jazz vocals… I mean, he wraps his voice right around “Afro Blue“… this is far more than “just another vocal performance”… what distinguishes Lutalo from the others is that he projects POWER in every note, every phrase, every word!” IMPROVIJAZZATION NATION,  Dick  Metcalf

“Lu brings a Soulful and Dynamic energy to every song that is nothing less than hypnotically mesmerizing. While developing his own style of delivery to Jazz standards, the influences of great artist like Lambert, Hendricks and Ross, Al Jarreau and Eddie Jefferson resonate comfortably in his smooth rich multi-octave voice.”  JazzUSA, S.H.Watkins

“Tribute To Greatness is the debut album by jazz vocalist Lutalo “Sweet Lu” Olutosin – I say jazz but Mr Olutosin’s style owes as much to soul and blues singers, and to my ears his voice has the sweetness and sophistication of George Benson.”    The Borderland (musicwatch column), John M. Peters

“.  Of all the hits Sweet Lu takes on, his spin on Leiber & Stoller’s “Kansas City” shines the best. Downshifting the song into a soul stirring ballad, Sweet Lu recreates this gem, with an entirely fresh perspective”.  Cashbox Magazine, Christopher Llewellyn Adams

Sweet Lu is reviewed by The Borderland (musicwatch column)

Tribute To Greatness is the debut album by jazz vocalist Lutalo “Sweet Lu” Olutosin – I say jazz but Mr Olutosin’s style owes as much to soul and blues singers, and to my ears his voice has the sweetness and sophistication of George Benson.

Supported by a quartet of musicians who are definitely in the groove, this ten track CD makes for some easy listening pleasure. The musicians are:- Louis Heriveaux – piano and Fender Rhodes, Henry Connerway III – drums, Winfield Gaylor – sax, and Kevin Smith – acoustic upright bass. Mr Olutosin includes two of his own songs, My Sunshine and Your Touch – both gently swinging winners – the rest are taken from the jazz and blues songbooks: I Bet You Thought I’d Never Find You, Parker’s Mood, Kansas City, Four, On The Red Clay, Baseball, Afro Blue and All Blues. Drawing on the compositional talents of Les McCann, Charlie Parker, Leiber and Stoller, Miles Davis, Mongo Santamaria and Freddie Hubbard, this is a rich and varied collection of songs for which Mr Olutosin’s effortless voice commands authority.

The theme of this album is to shine a light on songs no longer performed regularly by most jazz musicians, and that is very laudable, though I don’t think that Kansas City was ever in fear of being ignored. However, Tribute To Greatness is a very fine album, with an upbeat vibe and provides an apt showcase for a new vocalist. If you like George Benson and Al Jarreau then ‘Sweet Lu’ may be for you.

For more information about this artist, album and availability visit:

” This album is a must have for new fans of jazz, as it gives an honest rendition of some songs sure to be tried, but never duplicated