Jazz vocalist, lyricist, and composer Sweet Lu Olutosin has embraced, embodied, internalized this philosophy unflinchingly on his journey to becoming a top 20 international Jazz recording artist. Whether it’s headlining at the Kennedy Center in Washington, D.C or, playing the Teatro Rendano in Consenza, Italy , Lu’s performances are life changing.   Sweet Lu believes it is his duty, his mission to share his God given 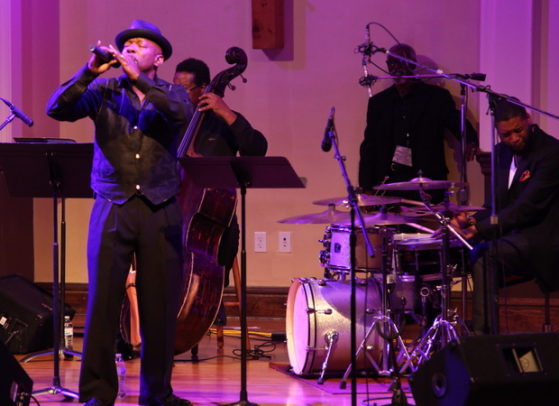 talent with the world; to use the idioms of jazz, blues, and gospel to share the spiritual healing and love this music, his music, imbues.  He feels ‘mission accomplished’ after many of his shows when members

or “I can feel the emotions in your voice” or, the big one, …” your music made me cry”.

Like many African American artists, Lu grew up in the church and his first introduction to music was as a member of, you guessed it, the gospel choir. Lu’s family spent many happy hours in their local church and he reveled in the robust joy of gospel music and the magical effect it had on him and everyone around him. At home, the family was only allowed to listen to gospel music. Outside the home the only secular music he was exposed to was the blues.

Gospel and Blues were the breadth of his musical experience until, by chance, he heard a recording of Al Jarreau singing “You Don’t See Me.’ After further listenings, Lu felt that Jarreau’s voice was totally free to communicate his message in whatever musical vernacular available to him. Sweet Lu’s passion was ignited. He knew from the moment he heard the opening rhythmic patterns of “You Don’t See Me” that this was the type of singer he wanted to be and the type of music he wanted to sing. HIs goal was to become an uninhibited singer using a mix of jazz, blues, and gospel to create music with the message of soulful, spiritual healing.

Lu immediately started listening to everything he could get his hands on. Al Jarreau, of course, Joe Williams, Lou Rawls,   Eddie Jefferson, and John Lee Hooker were some of the male vocalists who influenced him. Like most creative artists, he began by imitating their styles and vocal nuances until he could take what he’d learned and create his own unique vocal style. 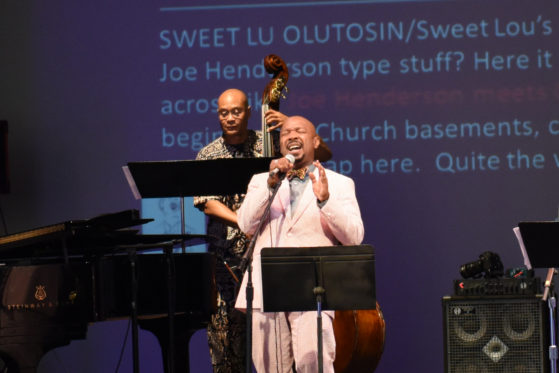 This musical odyssey did not take the expected route, however. Instead, his trek detoured with a 35 year stint in the US armed forces. Lu’s years in the military taught him the very important lessons of discipline, order, method and ultimately, belief in himself.  Lu recently retired from the Army with the rank of full Colonel.

“Olutosin is masterful, filled with ideas within his phrasing, and deeply rooted in blues. The soulfulness of his well-rounded masculine voice is a beacon in the male jazz vocal idiom. One voice I hope to hear for many years to come“.

Most recently, Lu has added lots of silky movement, i.e. dance, to his live performances. His audiences love him all the more for it. Reminiscent of Hollywood’s suave Sammy Davis, Jr. or Ben Vereen, Lu elevates his performances to another level, adding visual dimension and texture to make his brand of healing a complete treat for the senses.