By the late ’60s and early 70’s most of the steel mills in Gary and East Chicago, Indiana were closing as the area was hit by economic hard times. Unfortunately, that included a big increase in crime. My father didn’t like the direction things were going in, so he and my mother decided the family would move back to the Deep South, where they were both from. I remember the discussion they had on whether the move would be to Arkansas (my father’s birthplace) or Mississippi (my mother’s birthplace). This was an interesting time for us all, especially for my siblings and me. You see, we had spent summers in each place and had made friends, connected with relatives, and had great vacations there. We always felt we would return home to our other friends and neighbors at 1313 Durbin st. Gary, IN.

For a 10 year old, this was a very big move. Additionally, it was HOT, “Africa Hot”, nearly every single day. And everyone talked very differently, than what I was used to (they had that southern drawl thing, and sometimes I didn’ t know what they were saying). We didn’ t know anything about living in the south compared to what we knew about life in Gary, IN. I felt a lot of anxiety about the move, but I was also excited about it at the same time. My brothers and sisters shared my feelings on the subject. I remember having the ‘ kids’ discussions with each other after we had been given updates from mom and pop about the move’ s progress. The kids discussions focused on “how it’ s going to be when we get down south”. Everybody had their own version of what was going to happen where we went to school, or where we went to church, and when we joined this or that choir. We all had our own version of how things would play out, and in these versions, each of us saw ourselves as the star of the story (LOL). But the coolest thing about that whole process was that my mom and pop included us in their discussions about the move. That made us feel like we had a say in what happened to us (of course we really didn’t, but at least we felt like we did).

So we made the big move to 3929 Miller Ave, Jackson, MS and what an eye opening experience it was. Living in Jackson was so different from life in Gary. The summer vacations we’ d spent in Mississippi had been all fun and games, but this time, we got a taste of what REAL work was like. My Dad remembered his days on the farms of Arkansas and with his ready-made work crew (me and my siblings) he developed his own version of farm life. He rented a few acres of land out in the country, paid to have it plowed and put into rows, and then he put us to work. We would ride out to that rented land everyday after school and early on Saturday mornings to go to work. Each of my siblings and I had a different job planting and harvesting the crops. One-person dug the hole in the row, the next dropped the seeds, the next dropped in fertilizer, the next one poured in water, the final one covered the hole. The others had tasks like keeping the seed, fertilizer and water supplies ready to go. We worked these jobs for a while then everyone switched positions and we started again until we finished. After that first year of planting and harvesting, we knew that things would never be the same.

Soon my dad and my mom outgrew the place in Jackson and bought a place with acreage out in Madison, MS about 20 miles from Jackson. This was in the mid 70’ s and Jackson was the closest thing to a real city that existed in Mississippi. Actually, space was less of a problem for my parents than proximity to crime was. You see, trouble had begun to find my older brothers in Jackson, even with the limited spare time we had. So rather, than do nothing about it, my dad removed us from those negative influences. This time we REALLY moved into the sticks. Madison at that time was mostly dirt roads and farmland. We became full-fledge Horse-riding, corn & peas raising farmers.

Of course, my siblings and I had input into that decision too, but my Dad made it easy to agree with the move. His approach was quite smart when I think of it. He promised daily hunting/fishing trips after school for my brothers and me, then for my sisters, he promised new levels of freedom and horses. Let me ask you, “What 12-year-old boy could resist the thought of going fishing every day?” What 11 or 14 year old girl could resist the promise of a “pretty pony”. We sure couldn’ t. Yea, my Dad had a plan and he was working it HARD! Needless to say, we were all in!

Moving is always a big thing, but there were so many new learning experiences associated with country living that I couldn’ t focus on it. Country life though… now that was something that required my FULL attention. Country living is no joke. The work commitments between caring for livestock, growing crops, and ‘ country housework’ are a never-ending cycle. I learned quickly that people measure their work by completing the job they started and not by the time they spent. Country people are the hardest working people in America, about that I have no doubt.

~ Stay tuned for the next installment of my Journey

While I think that it is important for me to tell the story of who I am and why I sing and write this music we call’Jazz’, I’m a private person and I enter into this with some trepidation.

Sharing my ideas on Jazz music is something I could do with anyone at any time. I feel strongly about Jazz music and the reasons it came into being in America . I love the fact that so many people around the world enjoy it and that without the African American experience it would not exist.

However, sharing my life story and talking about the things and experiences that made me into the person I am, is very difficult for me. Opening myself up to this endeavor causes tremendous anxiety. I will try to tell this story as best I can by treating it as a therapeutic exercise that ends in a beautiful Jazz symphony for both the reader and for myself.

The story may not be glitz and glamour, but it is all mine, as truthfully as I can tell it:

# 1 Early life- I was Born in East Chicago, Indiana to parents who had followed the endless waves of African Americans who left the Deep South in the 1940-1950s.

They were searching for better lives and opportunities in the North. They knew of the mills and factories that existed there, and they wanted a taste of what they felt would be a better life for themselves. My father worked at the steel mill (Inland Steel) https://youtu.be/5xFRjC_IZ-g and mom worked various jobs to keep me and my seven siblings with food and shelter. If there hadn’t been so many mouths to feed, their combined incomes would have provided a comfortable living for themselves, but 8 kids is a great deal of responsibility.

I often think back on how crazy life must have been for them, but they did a good job of keeping us all on the straight and narrow. Perhaps having 8 kids is what helped to lead my mom to find Jesus and to become such a devout Christian and missionary. God must have told her, “Erma, you’re going to need my help with those bad-arsed kids of yours!” 🙂 just kidding. I’m absolutely positive that being in the gospel church 4 to 5 times every week kept me and my 4 brothers out of prison. I know this to be true, because I watched, as literally all of my male cousins who stayed in East Chicago and Gary, Indiana found their way into the prison system repetitively.

Being in church so often and especially at Faith Temple Church of God in Christ , I couldn’t help being consumed by the power of the tremendous talents of the wonderful Gospel choir. They sang with so much joy and conviction that it affected not only the congregation, but also the whole Block Avenue neighborhood. I remember many Sunday mornings when the choir would be singing so soulfully that the spirit was all over the place – people would walk in off the street, still in last night’s Juke-joint clothes and they’d give their lives to Jesus! That was some POWERFUL stuff! 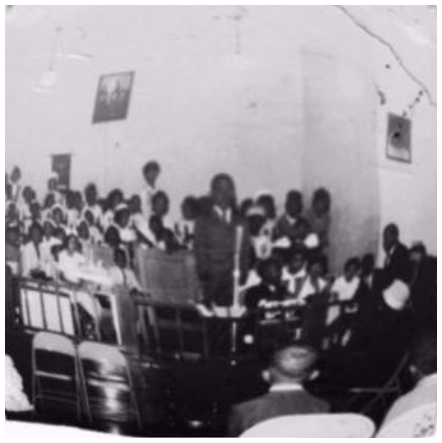 One of the Church mothers, Mother Turner heard me sing and liked it. She said I needed to sing in the choir. I cheerfully agreed, and joined the Children’s choir at age 5. Someone in the Adult choir liked my voice and I was invited to sing with the young adult choir as well (that was really significant). I was the only kid in both the Children’s choir AND the Adult choir (I guess I had so much ‘devil’ in me that it took a double dose of Gospel for Jesus to get it out) LOL.

This photograph was my first solo EVER with the ‘Hallelujah Choir’ East Chicago, Indiana 1965. Mother Turner had the Deacon stand me on a table and promised me a Hot Dog if I sang the solo. Back then I REALLY LOVED HOT DOGS and I sung that song with as much passion and conviction as I could.
~ Stay tuned for the next installment of my Journey